Well look no further here is how you get them, but with and without access to WSUS. Because for some morronic reason, Microsoft has decieded to once again waste, tons of hours amoung IT professionels around the world. This time by altering the way we can install/access RSAT for Windows 10 and Server 2016. If you are running a WSUS internally you have to follow eihter of these steps.1. Add the missing features to yourLearn More

Posted in Ikke-kategoriseret | No Comments » 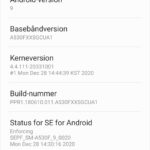 Update: Google released a fix, go to Google Playstore and update all. Next go to settings and verify there is no updates for your phone. Recently an update release by Google, caused havoc amoung Android users, resulting in unwanted behavior from many webbased apps. The reason for this apparantly derives from a faulty update. Fortunatly the fix is pretty straight forward or atleast this has worked in 10/10 times for me Go to the settingsLearn More

Posted in Ikke-kategoriseret | No Comments »

This website uses cookies to improve your experience while you navigate through the website. Out of these cookies, the cookies that are categorized as necessary are stored on your browser as they are essential for the working of basic functionalities of the website. We also use third-party cookies that help us analyze and understand how you use this website. These cookies will be stored in your browser only with your consent. You also have the option to opt-out of these cookies. But opting out of some of these cookies may have an effect on your browsing experience.
Necessary Always Enabled
Necessary cookies are absolutely essential for the website to function properly. This category only includes cookies that ensures basic functionalities and security features of the website. These cookies do not store any personal information.
Non-necessary
Any cookies that may not be particularly necessary for the website to function and is used specifically to collect user personal data via analytics, ads, other embedded contents are termed as non-necessary cookies. It is mandatory to procure user consent prior to running these cookies on your website.
SAVE & ACCEPT